The little bell could be heard across the yard, but only in spurts, as though it closely followed both quick and slow stealthy movement. Because it did!

“Where did she come from? We never saw her in the neighborhood before. I wonder who she belongs to?”

When the fluff ball long-furred white and orange kitty showed up out of the blue, she was a complete mystery….. whose early history would remain one. 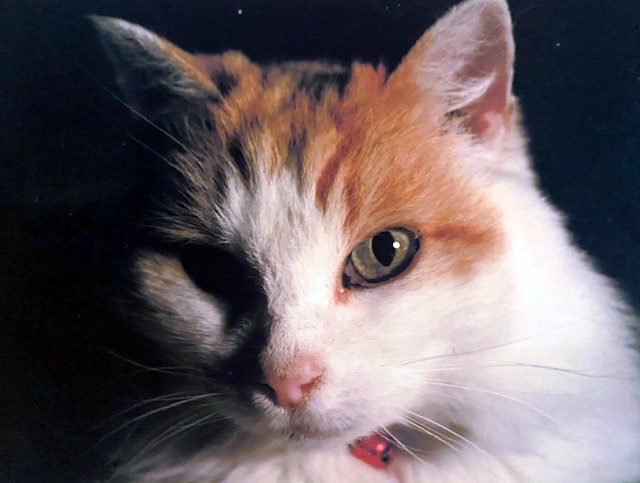 It had not been long before this cat’s sudden appearance that our hearty healthy athletic friend and co-resident had abruptly entered a different mystery, an extremely painful contractive semi-paralysis from the waist down. One day jogging down the closest country road to the ocean front, the next writhing in bed without relief. We were shocked, stumped and at a loss as to how to help her. Thus began a decades long journey, meandering down medical alleys only to come to dead ends, some “experts,” willing to make diagnoses and prognoses, others less sure and all with little more to offer than pharmaceutical band-aids to address what finally became known as Stiff Person’s Syndrome, thought to be some auto-immune variant of MS. Again, labels were not much help.

But there was a bit of help and comfort on the way from the non-human world, though it was not immediately recognized as such.

“This cat is certainly persistent! The last thing we need right now is another to take care of.”

Our living partner’s husband was not initially pleased and though generally kind to animals was trying to shoo this one away, carefully hoisting, then tossing the fluff ball over the edge of the deck where it landed gracefully in the grass and reapproached time and again, as though being flung was just the best fun and attention anyone could receive. And, apparently, there was no one in the neighborhood willing to claim the bell-collared kitty as their own.

And so it goes…..”Tinker Bell” did find herself a home with a family of four on a country lane with the sound of waves crashing in the distance, and whistle buoys moaning as background for her tinkling.

Tinker was never a strictly indoor or outdoor cat, but a mix of both. She could stealthily move through the grass as cats do, leaping up and over fences with grace. Not a hunter, she thankfully did not bring us birds or mice as prizes. No, Tinker was more like a comfort dog than a cat; I’d say a reincarnated golden retriever who would salivate when petted, and allow prolonged grooming and petting, so unlike many cats, and defying most stereocattypes!

As time went on, Tinker and her co-residents grew quite comfortable with her comings and goings…as far as we know she never ventured too far, and she was rural traffic savvy, so she was not a worry at all that way. Along with the comfort of contact with her deep soft fur, Tinker became something more for all of us. She emanated calmness, trust, and yes, an ineffable love seemingly beyond the mere human-animal affection bond often referred to.

Though difficult to describe It may have been something like healer and author Tammy Billups addresses in her book Soul Healing with Our Animal Companions: The Hidden Keys to a Deeper Animal Human Connection wherein the mutuality of our relationships across species can affect healing for both human and animal at some level. It may not mean that bodies miraculously recover though in some cases they do, but rather that some lesson can be learned that is liberating for both human and animal. I believe Tinker was a teacher for that time, when the equilibrium of our family life had been upset by a threatening disease.

Tinker lived a decade and a half, making moves with one half of us when we divided our household and went separate ways. She lived for a time in the woods outwitting predatory coyotes and surviving death threats from a grumpy old man not nearly as delighted by her frequent neighborhood visits as others were.

She did not like snow one bit, so she eventually returned to a new home in the temperate rainforest, where she spent the remainder of her days, living and loving the ones she was with.

Then one day, she disappeared– just as abruptly and mysteriously as she had appeared– apparently having served and completed her dharma (duty), and then some.

From time to time, when memories of Tinkerbell come to mind, a warm wave of adoration comes over me and I can almost hear that little tinkling off in the night, where the white cat stretches in a lazy downward dog, before taking a long leap over a bright orange Moon.

For the month of August, 2021 Every month co-creators of the Divine Dog Wisdom Cards and Cosmic Cat Cards and Guidebooks Barb Horn and Randy Crutcher draw a card from each deck of [...]

For the month of June, 2021 By Randy Crutcher, co-creator of the Divine Dog and Cosmic Cat Wisdom Card Decks “Okay, everyone pick a card from this deck, keep it [...]

Tinkerbell the Buddha Cat Dog The little bell could be heard across the yard, but only in spurts, as though it closely followed both quick and slow stealthy movement. Because it [...]

Rex, Come Home A special post for the month of April, 2021 By Randy Crutcher My father passed away this month at 96 and four months after spending his life [...]