“Okay, everyone pick a card from this deck, keep it face down and don’t turn it over to see what it says yet.”

Before class the teacher had carefully gone through the Divine Dog Wisdom Deck and selected the card themes she felt most relevant for her students, for their age and stage of life, and also with regard to the dynamics she saw at work both within individuals and among her students. A wisdom card user herself, she already knew that using these cards could raise issues and stimulate conversation, ways that could prove more effective that some of her other teaching methods. Interesting and captivating images with a few words could trigger her student’s imaginations (always one of her goals), and if a sensitive theme, be a safer less threatening means for helping young people broach a topic and bring up whatever experience or feeling they have around it. 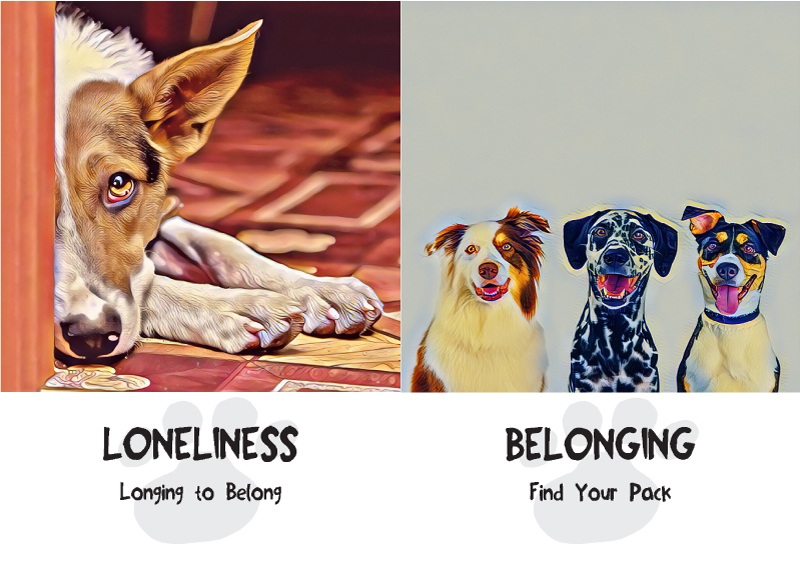 “Now, everyone turn their card over and take your first peak, noticing what you see in the image, and the words that go with it.”

The children make a variety of sounds, including laughter, lots of it.

“Who’d like to share their card and why they think they got the card they pulled from the deck?”

At this point, the teacher zeroed in on one student whom she noticed had been having difficulty adjusting to the peer group and had been somewhat quiet and aloof. She asked Mike what card he’d received, and Mike said it was the Loneliness card. He also offered that it made him a little sad that he got that card. The teacher quickly validated Mike and instead of speaking directly to him, asked the whole class if they’d ever felt lonely or sad. Lots of hands went up. Mike noticeably perked up when he saw that. The teacher continued to explore that theme for a little while longer, with a few students, some of the more confident ones, willing to speak about their experience with feeling lonely.

A student named Ryan sitting right next to Mike excitedly raised his hand. When Ryan shared his card, the teacher became incredulous but hid her own personal reaction, quickly proceeding to elicit responses from her students. By this time the students were all warmed up, both from engaging with the imagery on their own card and the natural curiosity that arose around wanting to know what cards their classmates had drawn and what it all meant.

“I think there’s a pretty good reason I got this card, and why I’m sitting next to Mike today,” said Mike. The teacher, and the whole class was curious about what Mike was going to say.

“I think I got the Belonging card today, because it’s the cure for loneliness!”

For the month of August, 2021 Every month co-creators of the Divine Dog Wisdom Cards and Cosmic Cat Cards and Guidebooks Barb Horn and Randy Crutcher draw a card from each deck of [...]

For the month of June, 2021 By Randy Crutcher, co-creator of the Divine Dog and Cosmic Cat Wisdom Card Decks “Okay, everyone pick a card from this deck, keep it [...]

Tinkerbell the Buddha Cat Dog The little bell could be heard across the yard, but only in spurts, as though it closely followed both quick and slow stealthy movement. Because it [...]

Rex, Come Home A special post for the month of April, 2021 By Randy Crutcher My father passed away this month at 96 and four months after spending his life [...]