Hello, my name is Jane — I talk to animals and sometimes they talk back to me. Recently I was called to do an intuitive session for a tiger, or rather for the tiger’s keeper. This “big cat” sanctuary was home to a variety of big (okay giant) felines. The story I’m about to tell you centers around one of the inhabitants, who we’ll call Vladimír, as he was an eight-hundred pound Siberian tiger.

I arrived, basket in hand, to converse with the big cats in hopes of shedding some light on behavioral and dietary concerns that the keepers had about their beloved animals. 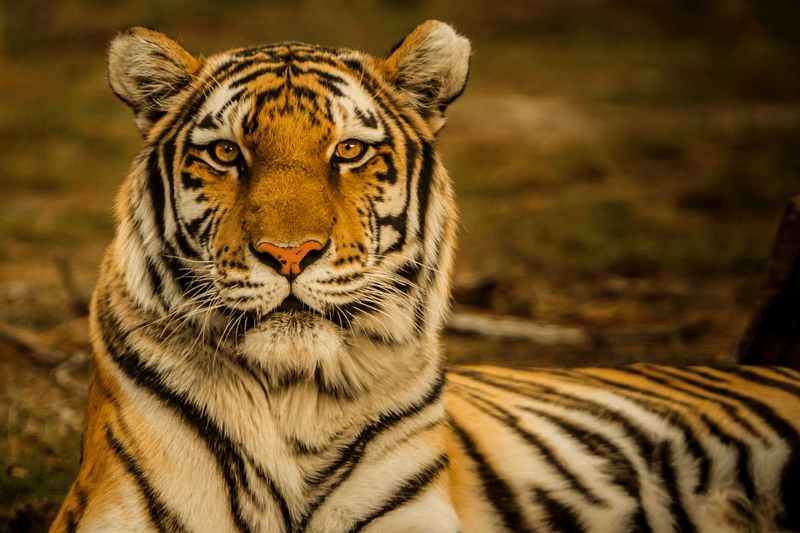 I set up my central focus, or altar, with the cloth and items that are sacred to me. I said a prayer, connected my consciousness to Vladimír and started to draw what I was perceiving in this mind-to-mind communication.

As I merged with its consciousness, I could perceive that the Tiger’s instinct was strong. “How was your food?” I started off with the obvious.

The tiger responded, and I started sketching wildly. Vladimír communicated a positive feeling. “Vladimír seems to like his food just fine,” I said to the Tiger’s keeper. Then I experienced a feeling of excitement as I started to sketch oddly shaped orange objects. Vladimir seemed to be saying that he particularly liked the orange chunks. When I relayed that information to the keeper she told me the tigers’ food consisted of nothing but raw meat. Hmmmm, I turned back to Vladimír and pictured the orange chunks and focused on sending it mind-to-mind with a questioning energy. The tiger was adamant — he liked the orange chunks and wanted some more. The keeper shook her head apologetically and I think she felt a little sorry for me.

I was not entirely discouraged because the information came so clearly that I strongly suspected I wasn’t inventing it. In fact that was the case, because I received call a week later from Vladimír’s keeper who said that when she cleaned out her tiger enclosure she’d found big chunks of pumpkin. It seems that one of the team had given the animals some wholesome autumn treats. I’d had a wonderful insight into the intelligence and wisdom of another living being on this great planet Earth.

Disclaimer: Jane’s opinions and insights are from her own perspective and experience and should not be used in place of veterinary advice or other professional counsel.

Author, artist intuitive, animal communicator, and medium for almost 20 years, Jane has studied with a Lakota Shaman, Buddhist meditation teachers, as well as at the Rhode Island School of Design. Her multiple-award winning book, Love Never Dies-A Psychic Artist Illustrates True Stories Of The Afterlife, is a ﬁrst-hand account of people reunited with loved ones and animals in the afterlife. Find her at JanesInspiration.com